History of our Parish

Over 40 years ago, we not only celebrated the establishment of Kimisis Tis Theotokou Greek Orthodox Parish, but also the continuation of the mission of the Greek Orthodox Church and the Hellenic Culture.

As we reflect back to the first moments, we remember the formation of our Parish on July 16, 1976, the groundbreaking ceremony initiated on Sunday, September 21, 1986 and the joyous event of the first Liturgy on December 18, 1988, when the church of Kimisis Tis Theotokou (The Dormition of the Theotokos) finally became a reality.  This day marked the history of the Greek Orthodox Archdiocese of America and the Metropolis of New Jersey.

The historical parish of Kimisis Tis Theotokou, for over 40 years, has offered the faithful, Orthodoxy and Hellenism and continues to do so with zealous efforts in order to preserve our beliefs and culture.  The Orthodox Church is a vital part of our lives because Orthodoxy is not only a tradition, but a way of life.

It has become the continuation of us and our ancestors through the next generation.  The Greek Orthodox Church is a haven to the children of our community and not only enlightens them on our faith, but also raises their respect and admiration for the Hellenic Civilization.  Our legacy will continue with them.

Today, we have 400+ families of diverse ages and backgrounds who worship at our Church. Here is a brief list of our milestones:

1973:
The Bayshore American Hellenic Association (BAHA) formed by early Greek residents of the Bayshore area of Central New Jersey. Meeting in members’ homes, motels, a real estate office, and the Shore Point Inn, the club was organized for the purpose of attracting Orthodox families, raising funds for a new Church complex, and to provide temporary religious services and a children’s Greek Language school.

1975:
Greek Language classes began at the Beer Street School. The first service was celebrated at the Holmdel Motor Inn. The Ladies Auxiliary of BAHA was established.

1976:
A delegation formally requested, and was granted recognition and sanctioning from the Greek Orthodox Archdiocese of North and South America, for formation of a parish.

1977:
The General Assembly approved the purchase of 6.5 acres of property on Hillcrest Road in Holmdel for $64,000 for construction of a Parish Complex. By June, 1979, the mortgage was retired.

1986:
▪ Ground-breaking ceremony for the Church and Administration buildings was held with His Excellency Metropolitan Silas officiating. 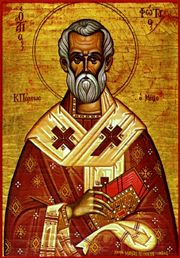 Photius the Great, Patriarch of Constantinople

Photius the Great, Patriarch of Constantinople; Bucolus, Bishop of Smyrna; Barsanuphius the Great and John of Gaza; Afterfeast of the Presentation of Our Lord and Savior in the Temple; Ilyan of Homs

Visit the Online Chapel for more daily readings, hymns, a monthly calendar of saints and feasts, and more.